Amsterdam offers several unique, non-ordinary hotels. In this overview we have listed a number of exceptional lifestyle, design and boutique hotels. We promise you that they guarantee maximum service and a unique experience. They are all located on very special locations and often in historic buildings in the centre of Amsterdam. These hotels offer a perfect base to discover Amsterdam. So be surprised and get inspired. Hotel Sebastians is located in a historic canal house on the famous Keizersgracht in the heart of Amsterdam. The building dates from the year 1735 and is almost 300 years old. The 3-stars hotel is situated in the Grachtengordel-West district, which was built during the golden age. This is an absolute top location in the centre of Amsterdam. Hotel Sebastians offers an excellent base for exploring Amsterdam. The Rijksmuseum is nearby and many top attractions can be reached on foot within 15 minutes. This 4-star lifestyle hotel is housed in the historic building “‘t Kasteel van Aemstel” that was used in the past as the headquarters and printing house of newspaper “De Tijd”. It’s located in the centre of Amsterdam at the Nieuwezijds Voorburgwal. This is a former canal that was filled in 1884. Then it became an important traffic artery. The Central Station is located at 550 meters and the Dam Square at 300 meters. The INK Hotel MGallery has been awarded with the European Hotel Design award in the Lobby, Lounge and Public Areas. All rooms are designed by the famous Concrete Architects from Amsterdam. This is a well-appreciated hotel in the centre of Amsterdam. The hotel is named after the legendary Johan de Witt. This was an important Dutch politician in the 17th century. The Kimpton De Witt is located just 300 meters from the Central Station on the Nieuwezijds Voorburgwal. This is an important traffic connection. The 5-star lifestyle hotel has a lot of modern facilities such as a restaurant, bar, sun terrace and extensive wellness facilities. The Kimpton De Witt is close to the Royal Palace and Dam Square. It offers an excellent base for exploring the historic city centre of Amsterdam. Hotel V Nesplein is situated in the middle of the centre of Amsterdam at the Van Nesplein. This design hotel offers stylish rooms and a great restaurant. It’s a very appreciated 4-stars hotel. The hotel is close to the Oudezijds Voorburgwal, where you can find the oldest part of Amsterdam. At the Oudezijds Voorburgwal  you can find the world-famous Amsterdam redlight district. Hotel V Nesplein is only 150 meters from Dam Square where all major tram lines pass. This great hotel offers a very central base to discover Amsterdam.

Hyatt Regency has been located on the east side of the city centre since 2016. It is close to Artis Zoo and the famous Prinsengracht. This hotel is housed in the stately building of the former Emma Children’s Hospital. The 5-star hotel is fully equipped and includes a fitness centre, terrace and bar. In the neighborhood you can find Theater Carré and the Dutch National Ballet. On the quiet outskirts of the city centre, this modern and luxurious lifestyle hotel offers a great base for discovering Amsterdam.

The 5-stars art’otel Amsterdam is located in the centre of Amsterdam opposite the Central Station and within walking distance of Amsterdam’s main attractions and shopping areas. The hotel offers modern rooms with art work by Atelier Van Lieshout. Art’otel is located in a building that was built in 1921 for the insurance company “Koninklijke Hollandsche Lloyd”. The central location on the Prins Hendrikkade offers a great base for discovering Amsterdam. Amsterdam’s well-known Canal Belt is just a few minutes away. The Radisson Blu is located in historic 18th and 19th century buildings on the corner of Kloveniersburgwal in the inner core of Amsterdam centre. Originally a confectionery and brewery were established in this building. In 1755 it became a hotel, later it served as a casino, cigar factory and paper mill. Since 1901 it is again a hotel. Today it is a luxurious 4-star lifestyle hotel with great facilities and inspiring colorful rooms. The hotel is just 400 meters from Dam Square. The Highland House is a well appreciated hotel in the heart of Amsterdam. It’s just 300 meters from Dam Square and 500 meters from the Central Station.The Highland House is a great starting point to further discover Amsterdam Centre. This boutique hotel is located in the Nieuwe Nieuwstraat, a narrow medieval alley in the oldest part of the city. All rooms are uniquely themed and finished with high quality materials. The hotel is equipped with all modern facilities and services, including an Airport shuttle and parking facilities. The chic Andaz hotel on the Prinsengracht has combined the atmosphere of luxury and lifestyle. The hotel is housed in a modern canal house, which was built in 1976 as a public library. Previously there was an office building of “Firma De Waal”. Nowadays the Andaz hotel offers a great base for tourists who want to discover Amsterdam and set high standards for their accommodation. The rooms of this 5-star lifestyle hotel are individually designed by Marcel Wanders. The 5-star hotel The Dylan is located on the Keizersgracht in a building that was built in 1617 as a theater. This is clearly visible at the striking entrance gate for the building. It says (freely translated from Dutch) “The world is a play scene. Each plays his role and gets his part “. The Dylan is a beautiful design hotel that is fully equipped, including luxury bathrooms, a fitness centre and a garden with terrace. Several rooms offer a beautiful view over the canal with its stately canal houses. 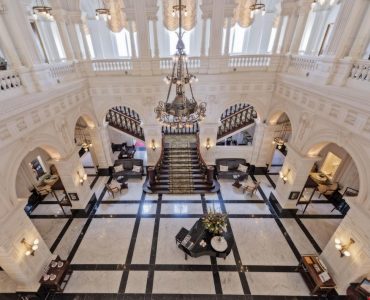