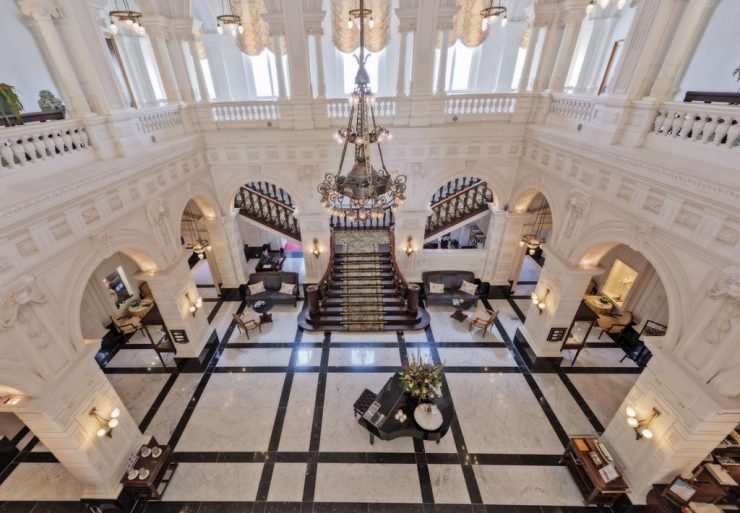 Anyone who loves luxury can end up in Amsterdam. Although the Dutch national character is modest, you will find many luxury hotels in Amsterdam. In the overview below we have listed the best ten grand hotels. Some hotels are located at the famous Dam Square while others are beautifully situated on the Amsterdam canals. These luxury hotels are all rated with 4-stars and 5-stars and they usually come with a high-quality restaurant. So get inspired by the Dutch grandeur in historic Amsterdam. The American Hotel is a famous grand hotel near the Leidseplein. The building dates from 1902 and is built in Jugendstil style. Today it is a national monument. The American Hotel is one of the most famous hotels in Amsterdam and many celebrities stayed here, including the dancer Mata Hari. The 4-stars hotel also houses Café Américain, the oldest reading table in Amsterdam. This hotel is just 500 meters from the Rijksmuseum and Dam Square is a 15-minute walk away. Grand Hotel Amrâth is a luxurious 5-star hotel located in the former “Scheepvaarthuis” near the Central Station. The building was erected in 1913 as a joint office of six Amsterdam shipping companies. It is generally seen as the first building that has been built according to the “Amsterdam School”. Since 1972 it has been a national monument. The Amrâth offers spacious rooms for Amsterdam standards. Furthermore, the grand hotel has a bar, restaurant and extensive wellness facilities. The 5-star Grand Hotel Krasnapolsky is famous in Amsterdam. History goes back to 1865 when Adolph Wilhelm Krasnapolsky bought a building in the Warmoestraat. Over the years, the hotel has been extended further and nowadays it is prominently located on the Dam Square opposite the royal palace in a 19th century building. The hotel currently has 451 rooms. Grand Hotel Krasnapolsky also includes The White Room restaurant which is awarded with a Michelin Star. The 4-stars Ambassade Hotel is located in an original 17th-century canal-side building along the Herengracht and Singel which is part of the Canal Belt. All rooms are uniquely decorated featuring luxurious décor combining art works from the 1950’s-CoBrA movement with Louis XV furnishing. The library bar contains over 4,000 books, all signed by the authors at the Ambassade Hotel. Dam Square, featuring the Royal Palace, is 600 meter away from the grand hotel. The Kalverstraat shopping area, the Anne Frank House and the great Museums of Amsterdam are close by. This 5-star grand hotel is located in 25 connected 17th and 18th century canal houses and warehouses on the Prinsengracht. The Pulitzer hotel offers a unique and distinct experience of a hotel in a maze of canal houses with an exclusive restaurant and a beautiful garden. The hotel has recently been completely modernized. Combining traditional and modern Dutch design, the hotel offers 225 unique guest rooms and extraordinary suites. A large number of rooms offers a view over the canal. Hotel Legend The Grand Amsterdam is a 5-star hotel located in the former Prinsenhof. The complex is located near Dam Square and was built in the 15th century as a monastery. In 1578 it became a guesthouse for tall guests, such as Willem of Oranje and other royalities. Between 1652 and 1656 and between 1808 and 1988, the Prinsenhof was used as the city hall of Amsterdam. In the current hotel you will find 177 beautiful modern rooms and suites. The grand hotel also includes the Bridges restaurant that is awarded with a Michelin star. De L’Europe Amsterdam is a luxurious hotel that is located along the Amstel River in the heart of the city. It is situated at a legendary place, exactly where a defense tower was built in 1535 when Amsterdam was just founded. Already in 1638 the tower was replaced for an inn. The current building dates back to 1895 and is now a national monument. This 5-star grand hotel is one of the most luxurious of Amsterdam and It features the fine-dining Michelin 2-star restaurant Bord’Eau. The InterContinental Amstel Hotel is a very appreciated 5-stars hotel in Amsterdam. It’s located on the banks of the river Amstel in the heart of the city. This monumental hotel which was built in 1867 has been visited by many celebrities. It’s also one of the most luxurious and largest hotels in the centre of Amsterdam. The tasteful rooms and suites at Intercontinental Amstel offer panoramic views over the city and the river. Staying overnight in this grand hotel ensures an unforgettable luxurious stay in Amsterdam with all the famous attractions within walking distance. Hotel TwentySeven is a 5-star hotel that is located in the heart of Amsterdam on the famous Dam square. It is one of the most centrally located luxury hotels in the city. From the hotel you can see the Royal Palace. This hotel is located in “Gebouw Industria”, which was built as a societal building in 1913. Today it is a national monument. Hoten TwentySeven contains sixteen individually designed suites and is equipped with a bar and the luxurious on-site restaurant Bougainville. This is another famous and very luxurious hotel in Amsterdam. The Waldorf Astoria Amsterdam hotel consists of 6 monumental 17th century canal palaces. This hotel offers all modern facilities and services, including a wide range of wellness services. The beautiful 5-star grand hotel is located at the Herengracht in the centre of the city and at the breathtaking Canal Belt. The Rembrandtplein is only 150 meters away. The Rijksmuseum is 400 meters away. It’s a beautiful and peaceful place from where Amsterdam can be discovered. 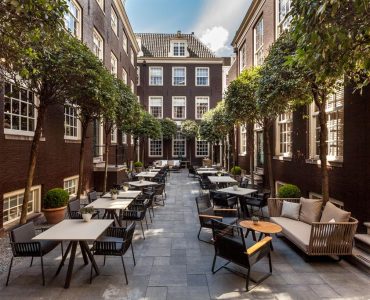 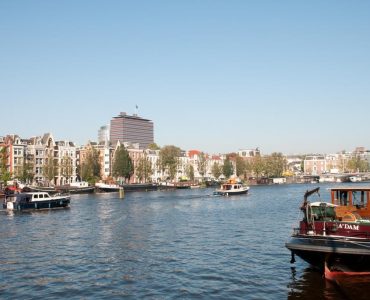 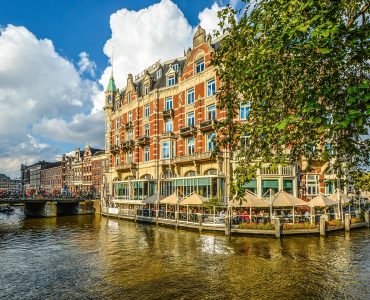 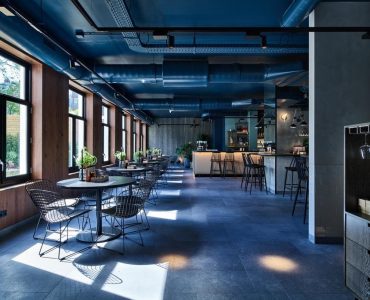